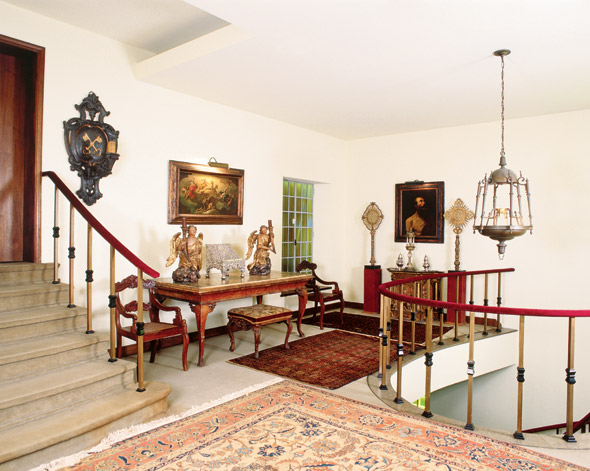 The Baroque style prevails in the second-floor hall, with items from Italy, Spain and Austria. During the XVII century, this style was popular in many European countries, particularly Italy where it first appeared, reaching the Spanish and Portuguese colonies of the Americas during the XVIII century and leaving its mark over much of Brazil, particularly in religious art and architecture.

On the right hand side, in a quiet corner that suggests an oratory, are religious items from Spain and Italy dating back to the XVII and XVIII centuries. Gilded processional crosses flank the painting by José Ribera (1590-1652) showing  St. Hieronymus the Penitent.

The Venetian table supports a hammered Peruvian silver missal-holder dating back to the days of Spanish domination, together with a pair of Austrian torch-bearing angels in gilded polychrome wood. The painting hung above the table is a study for the fresco of a palace ceiling, Allegory, attributed to Il Guercino (1591-1666), representing a mythological scene with Apollo and his followers.

Set dramatically at the top of the stairs is a wooden sculpture of St. Teresa de Avila, portraying the reformer of the Carmelite Order and exemplifying the Austrian Baroque.

On days when concerts and lectures were given here, this area became a lively, bustling hub attracting steady streams of arriving and departing visitors.