Becoming Past and Becoming Future

I don’t believe in chance, but in synchronicity. Initially, Enrica Bernardelli and Daniel Blufuks were supposed to participate in two different moments of the Breathing Project, but I decided to put them in the same edition. The immediate reason was that, I thought, the opening of the project in the same week as Art Rio (the first international art fair of Rio de Janeiro), would justify having a Brazilian and a foreigner together. At first, their work didn’t seem to have any proximity. But, as the two artists went on talking about their ideas – to make a film departing from the eyes in the paintings of the collection (Blaufuks) and a piece called Eyelid’s Concert (Bernardelli), I noticed a visual syntax in common: the gaze as a starting point. But this still says little. My mind’s eye began then to open up and my perception to wish that the intelligence could penetrate these singularities, so rich and tuned in to their sensibilities, in order to infer a sense of greater proximity between their work, which I intuitively knew to exist.

Between the stormy waters of Enrica and the calm waters of Daniel, I noticed impulses driven by time. What was stormy in Enrica and calm in Daniel was the way of dealing with the time of memory that passes by us all. Both address memory and want it pulsating in the immediate present: in the instant. Blaufuks wants what in the instant immediately becomes a layer of the past and Bernardelli, what in the instant, launched into the past, immediately opens itself to the next moment: the future. The first is becoming past and the second is becoming future, but both are present instant.

The intervention Three Quarters of Memory comes from the awareness of the totalizing impossibility of memory. The memory of the past is necessarily incomplete, full of gaps, holes, alternations between absences and presences. I realized this aspect when he said he would like to include in his intervention a work called Memory Landscape (Shoa), which consists of a light box with 30 slides of a landscape, frames taken from the film Shoa, by Claude Lanzmann. It was curious, (to my surprise), that the images didn’t have the presence of people, in an episode of history marked by the brutal destruction of bodies. Instead, peaceful landscapes of pine forests which, as told in one of the interviews of the film, were planted to hide the secrets of the extermination camps. Concealing the pain, the serenity of nature in its inherent greatness. Far from the artist to have intended in that way to forget what had happened, this work is there, instead, to remember the Nazi terror that nearly exterminated all the Jewish population of Vilnius, where the Klabin family originated. But behind the landscape we have to find the hidden pain. What I want to show is that to deal with the memory of the past in this way is to perceive the greatness of the imponderable, of what inevitably remains and will never be fully grasped. To notice, in the abyss of the past, the unattainable outlines of limits around the void, and to accept them. What the artist proposes to us is to fill this formless form, which is the past, so that this action can provide an outline of our memory; of our present.

Fundação Eva Klabin , being both house and museum, materializes the idea of a past that becomes present in the future. In other words, of how art resists time by being present in time. It is a memory, the outline of which was established by Eva Klabin, as indicated by Daniel Blaufuks in the cornerstone of the intervention, Three Quarters of Memory, in which the eyes in paintings of the collection, recorded in video and Super-8, remind us of memories no longer accessible and which, like accomplices, belong to a universe that was established between the collector and the collection. The eyes in the paintings of Tintoretto, Pietro Pietro Roi, Reynolds, Lawrence, Gainsborough watch us from the depth of time and create a suspended atmosphere which makes us prisoners of a timeless experience, which it is duration itself. Due to the mastery with which Blaufuks controls the mechanisms of the moving image, Three Quarters of Memory has the quality of making us prisoners of a circle of time that we don’t want to leave and which could be endless. He places us face to face with Bergson’s experience of duration. We are memory by being time: we are becoming past.

In the intervention Eyelid’s Concert, Enrica Bernardelli invites us to cross the day without excluding art from our daily activity. As Tarkovsky proposed, building sculptures with time. In the Renaissance Room of Fundação Eva Klabin, the artist built another room 9m x 4m, with 4-meter-high tulle curtains which isolate, inside the museum, that which within it is already isolated from the world, inviting everyone’s singular look to cross this doubly segregated space, establishing, in this way, a new territory impregnated with the power of art – but an art which leans over the mystery and the unknown and brings us closer to ourselves, lubricating our gaze. She offers a field of such intensity that it places us face to face with the imaginary, the unconscious and the impulses that drive us.

For Enrica Bernardelli ” the most important elements of this work are the curtains and the eyelids, because they conceal as well as reveal and allow us to understand that the true dimension of art is to be perceived in existence, without the need of interaction with the work. Art doesn’t need to be in museums but to permeate our everyday lives”. With this intervention she proposes to make a movie without film, a movie made out of the perception of reality itself. The Renaissance Room is transformed into a fragment of Film U, a piece by the artist which has been extended in time and takes many different forms, depending on the moment and place where it is created, basically moved by the idea of changing life in film, reintroducing art to daily life.

The artist changes the Renaissance Room into another scene of her imaginary movie. She creates a static and silent scene, in which living static bodies, with animal, flower or geometric masks, or with bodies simply sleeping, trigger an unreal reality in suspension, of a world in state of metamorphosis, like a memory of the future in a place that stores the memory of the past. Her intervention suggests that our imagination continues this visual “narrative” that impregnates our sensations

Eyelid’s Concert is a mute scene surrounded by sounds of birds, whose chant brings us back to the immediate reality of life, suggesting that, in art, there is no inside or outside. This is the reason for the thin tulle curtains that separate the museum from itself, as well as for the eyelids, the movement of which takes us outside and inside ourselves, reminding us of the subtle and delicate separation between a pulsating art and life and an art and life asleep in the day to day. The artist leans over the abyss of the future, with the conviction of the mystery and the unknown, proposing a time which doesn’t allow for the pressure of the fear of the imponderable, but instead, wants it as the motor of the mutating form; metamorphosis of the time of sensations: thus becoming future.

Daniel Blaufuks and Enrica Bernardelli are not magicians of time, which deceives us with its operational linearity. Instead, they offer us the instant as the force of life and art, each one departing from a point of duration and throwing us into a spiral where past and future meet on the tip of a cone instant which opens into two directions of the abyss: the becoming past and the becoming future, transversed by sounds of nature, like the rumor of the universe, which provides the dimension of our physical and immanent reality. In Blaufuks the noise of the sea, in Bernardelli, the sound of the birds.

I invite you to your own memories and imaginations… 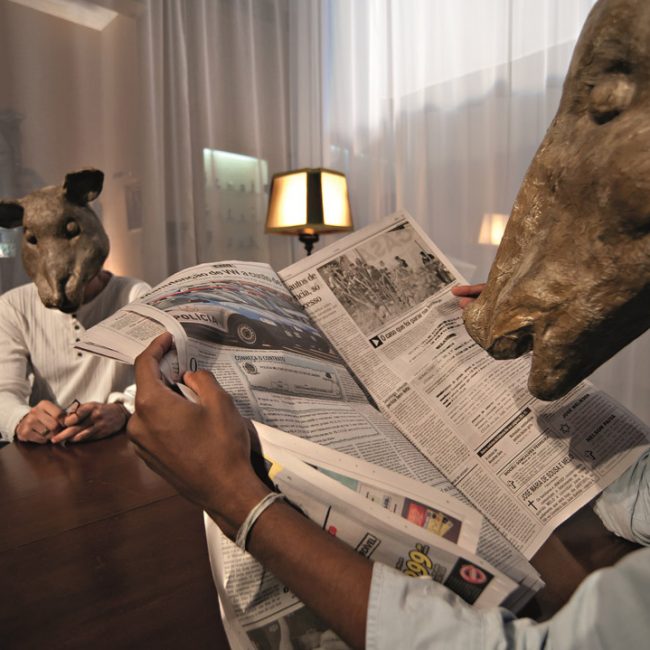 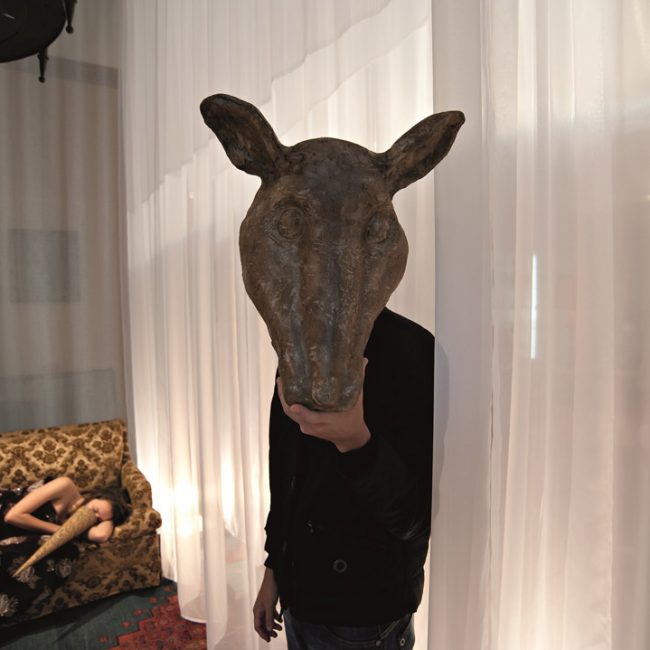 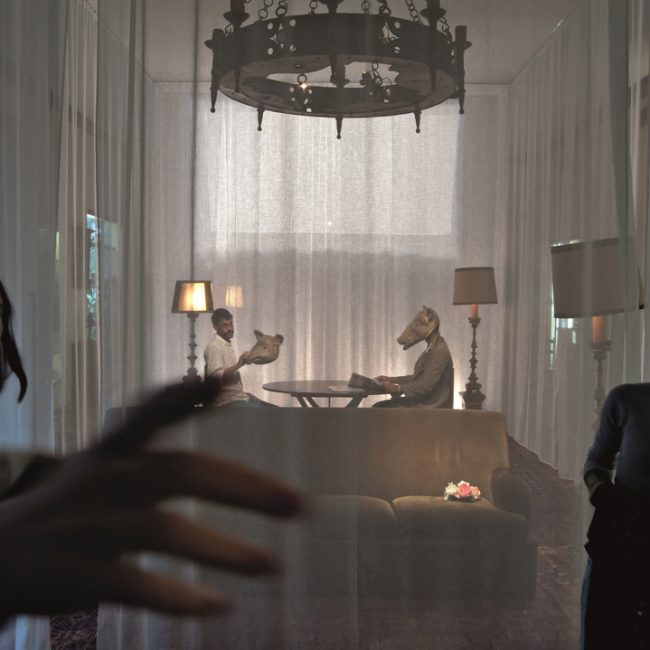 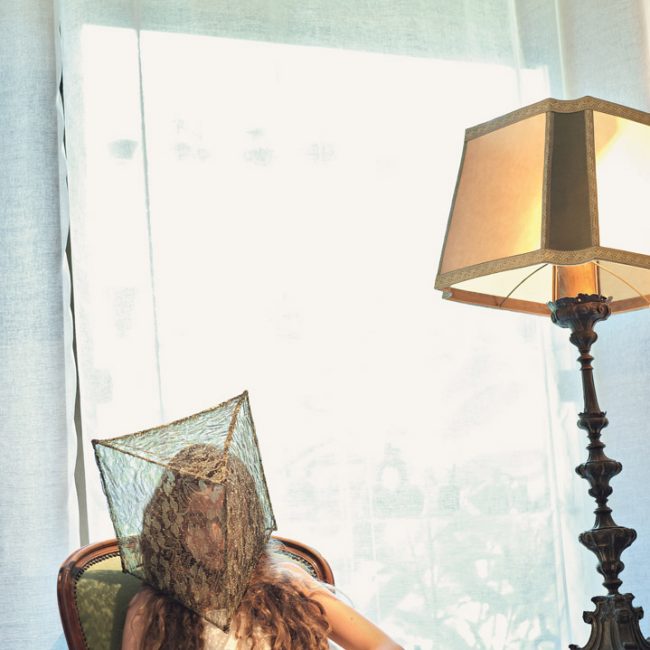 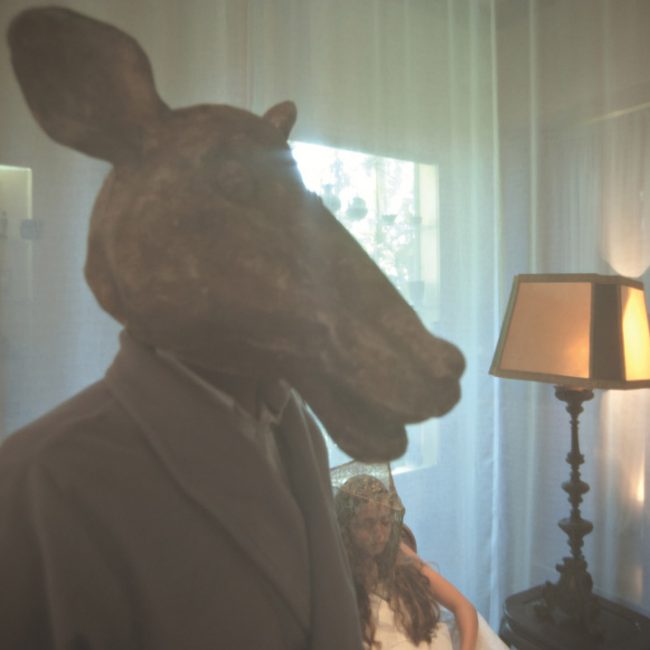 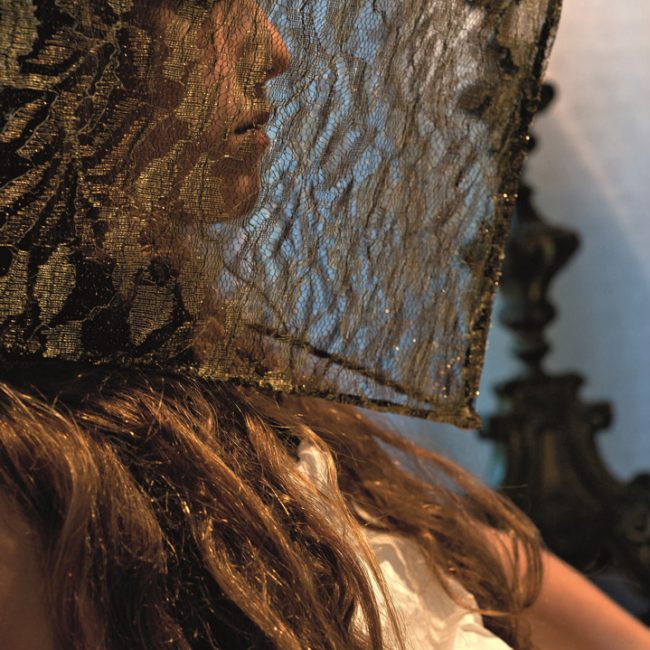 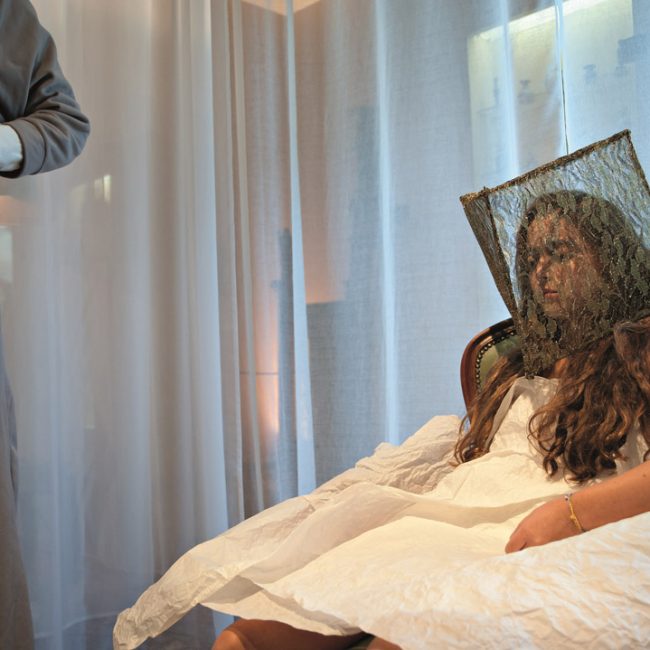 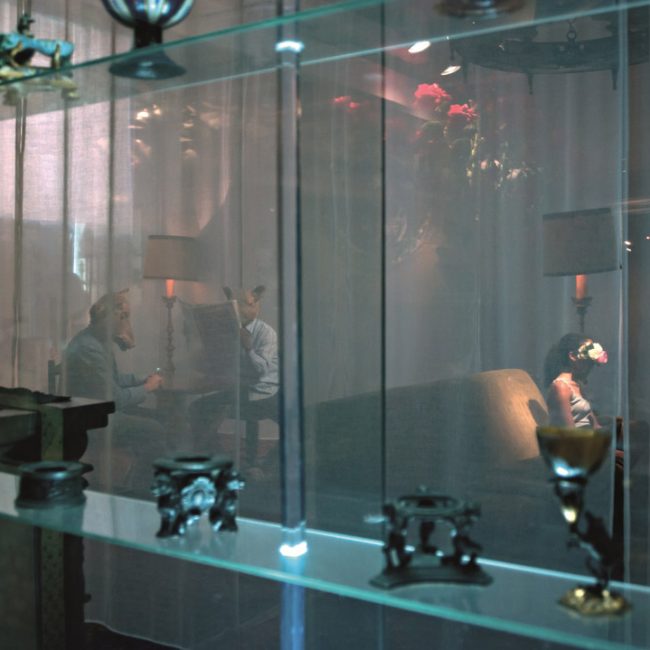 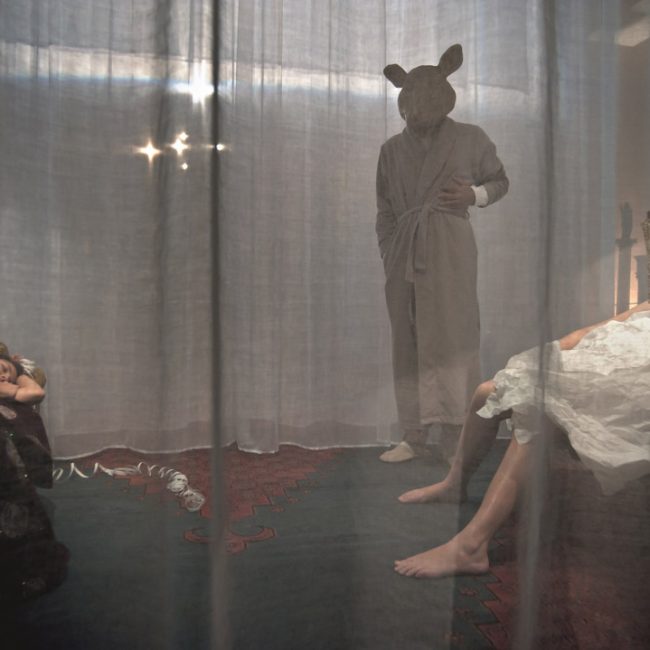 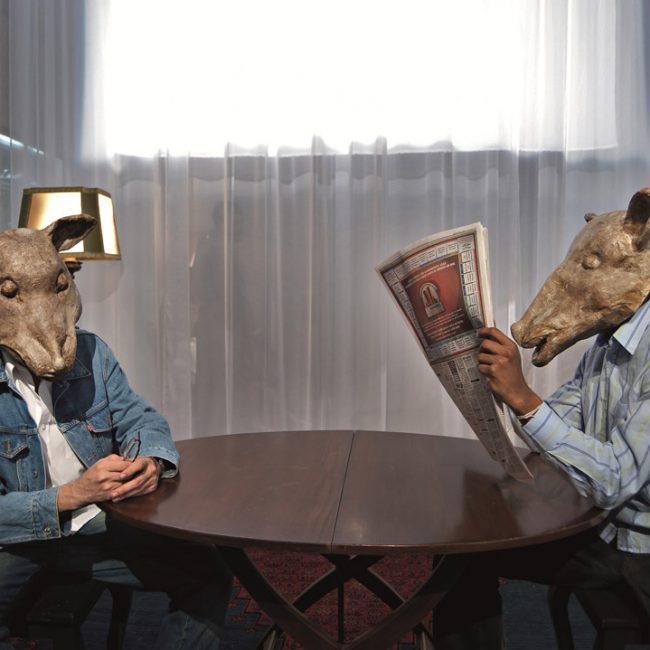 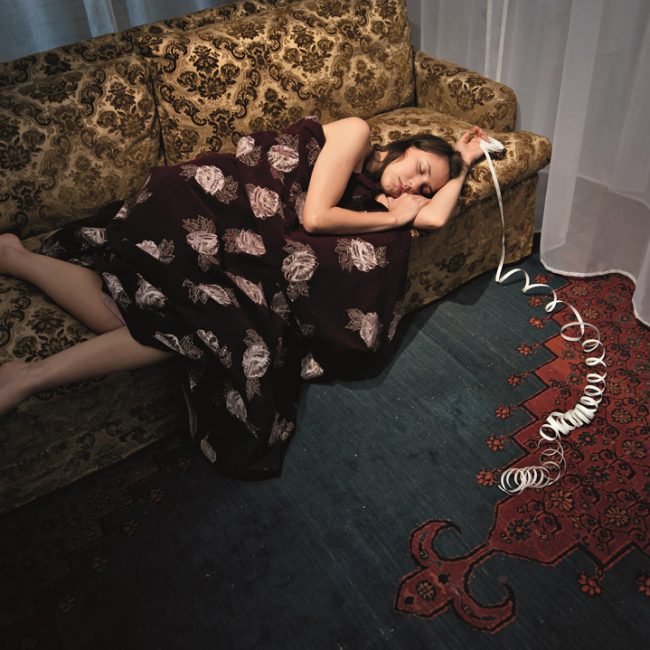 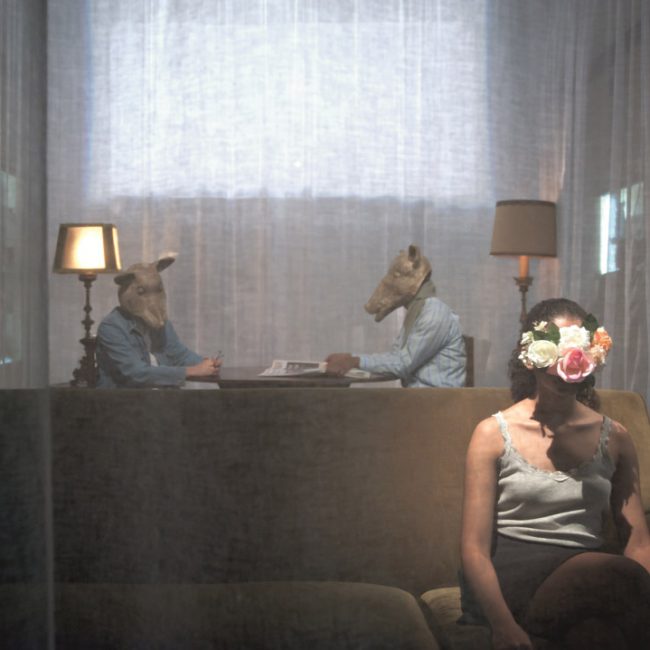