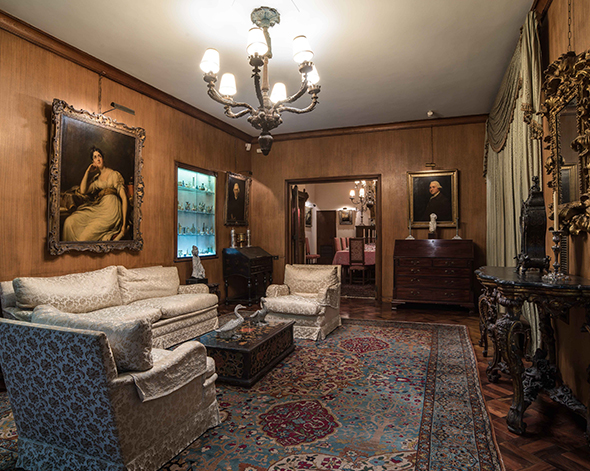 As night fell, Eva Klabin would come down from her bedroom and sit in the same armchair in the British Salon, where she welcomed her friends. Here she spent long hours after dinner listening to her favorite composers or amusing herself with thrillers by Agatha Christie and Georges Simenon. Alongside the heaps of pocket books at her side was a Victorian silver tray holding glasses, an ice-bucket and a bottle of whisky.

The cherrywood panels lining this room hold paintings dating back to the second half of the XVIII century, which was the Golden Age of portraiture in England, followed closely by landscapes. This gallery of great portraitists whose works reflect the elegance and sophistication of their times, include Sir Joshua Reynolds, Thomas Lawrence, Lemuel Francis Abbot, George Romney and Thomas Gainsborough, who also painted a landscape that is tucked among the portraits.

Two display cabinets warrant particular attention. The first holds the rare collection of tanagras – terracotta statuettes discovered in excavations at the Greek city of the same name and dating back to the Hellenistic Period (IV century BC – I century AD). The second cabinet holds rows of delicate Roman glass vases taken from archeological excavations around the Mediterranean.

Two other showcases that were arranged after the death of the collector bring together silver items used in Jewish rituals, paying tribute to the religious traditions and origins of the Klabin family: the Torah breast, the eight-branched menorah whose candles are lit to celebrate Hannukah, the Feast of Lights; the silver Hanukiah holding the three blessings that are prayed for during the eight nights celebrating the Feast of Lights, and three lovely German lidded chalices from Central Europe.

Also noteworthy is the six-armed pewter Venetian light-fitting dating back to the Baroque; the gilded wood Rococo console from Austria; and the Italian mirror with its Baroque wooden frame, also chiseled and gilded. An elegant Louis XVI pendulum clock stands on the console, with a wooden casing trimmed in tortoiseshell and bronze.