I see OPAVIVARÁ! as heirs of the force line I call the post-Neoconcrete rupture: the time when Lygia Clark, Lygia Pape, and Hélio Oiticica shifted away from Neoconcretism and took the relationship between art and life to a radical new level, exiting the field of purity of perception to enter the field of action, stressing the concrete facet of reality (hence Concretism, not Constructivism) by making the concept of the artist as proposer and the viewer as active receiver fundamental to the realization of an artwork. A work is only effectively realized when an active receiver is involved.

At OPA! this question is experienced intensely and with a contagious lucidity (that I would hazard to say is its principal feature), setting up tensions and frictions in the daily circuits of people and cities, casting into question the different segments that make up the dynamic of urban spaces in contemporary times. They engage in diluting the frontier between art and life, taking practices from domestic life to the city space and inverting the logic of spatial and social segregation in big cities, including in the so-called public spaces of museums and cultural institutions. OPAVIVARÁ! deconstruct the traditional concept of urban space, showing clearly how the dismantling of traditional spatial relationships is already used as a survival strategy in big cities. People have to resort to a whole host of expedients because of unemployment, issues relating to immigration, transportation, housing, etc., or even positive communal practices, as on Rio’s beaches, during carnival, in street markets, in large-scale musical events, and in cathedral-museums, which have become pilgrimage destinations for the tourist industry. Ultimately, they exploit this energy of being together from the conceptualization of an artwork to its final realization, which has to be experienced and lived by those who come into contact with it.

Tracing out the genealogical force lines that cross it, we might say that some of the works, like the I love street vendors postcards (Eu amo camelôs)  from Rio de Janeiro or their Barcelona counterparts (Eu amo manteros), call to mind Lygia Pape moments, drawing strong relations with urban space (recall Pape’s magnetized spaces):

Making those postcards means tampering with that image you’d rather show of your city. It’s an operation designed to evoke Rio’s iconic landscapes through the works and through the street vendors, who are also building the image of this city.[1]

What we see in global cities is that we’re always in public spaces, which bring these tensions, and these tensions become exposed. More often than not, they suffer a lot from the necessary capital injections, from the production and consumption industry, where the city has to be a great showcase, a great spectacle in this system, and this system is always accompanied by a normative package of fascism, racism, xenophobia, chauvinism, and that clashes a lot in public space. There’s an imperative side to this system that imposes itself, but we realized there’s also a reaction, which has a voice that speaks back and quickly; that happens a lot in public spaces. It’s a public space that’s really controlling, always emptied out, and it’s precisely this space that we invade.[2]

Their actions are always very enticing – inviting people to join in, tempting them with the pleasure of coming together, like in the experience of sharing a meal, resting together, singing together, experiencing the pleasures of life that can be crushed in the daily grind.

The pleasure of experiencing the motor senses of the body is fundamental for understanding where it is that OPAVIVARÁ! speak to us. And it was the post-Neoconcrete rupture that gave room for this place in Brazilian art. It would be fair to say that overall, the idea is to express the conformation of a new process of subjectivization. The desire to express this new event that is the dilution of the frontiers between what is inside and what is outside, what is subjective and what is objective, in contemporary societies, which was foretold in the experiments proposed by the post-Neoconcrete artists.

In each of them this phenomenon is expressed differently. Lygia Clark seeks out the inner dimension, like the extensive reverse side of exteriority (hence her more psychoanalytical vision); for Lygia Pape, the dimension of the other in its relationship with the social fabric takes precedence, hence the acute sensitivity to urban space and social webs; and Hélio Oiticica, with pleasure as the main catalyst and point of convergence and dissolution between the interior and the exterior. But in all of them, the body is the driving force for the work.

OPAVIVARÁ! transit between the different layers of these expressive potencies, offering a different spatiality where art emerges in its potential for questioning interpersonal and interspatial relationships in our big cities in an easy, vibrant, light-hearted way. This was another of the reasons why I invited them to take part in the 24th BREATHING. After all, the material on offer to them was the material of a house stripped of its life when it was turned into a house-museum. The question, then, is: how to interact with a space that would be public, but at the same time is of a private nature, in that all its rooms and even its former owner’s personal belongings are preserved, but cannot be used as such? What the artists from OPAVIVARÁ! felt was lacking, and indeed what many former BREATHING artists have felt, is the absence of any life flows, which were severed the moment the house became a museum.

One of the ways OPAVIVARÁ! tackled this question – very insightfully, it should be added – was to bring in works they had done previously in other (often public) contexts, which could here take on a new existential potency by being introduced to a house-museum setting. Although this idea of recontextualization is “commonplace” in the current art context and is a hallmark of the BREATHING project, it ceases to be so when it becomes an action strategy, as is proposed in BREATHING. In other words, OPAVIVARÁ! radically embrace the goal and purpose of the project.

For instance, a work like Pornorama suggests (from the wordplay) that the visitor is given a panoramic view in the Renaissance Room, just as Eva Klabin made it, with the history of art displayed panoramically, grouped into four showcases in the corners of the room, each one representing one of the four continents that shaped the history of the great navigations and the Renaissance (Europe, Asia, Africa, and the Americas). Meanwhile, it induces the idea that the visitor to a house-museum is a kind of voyeur of someone else’s private life. This perception could not be more aptly expressed in any other type of museum. It shifts the point of observation from the erect, face-on posture typical of traditional museums to a lying position, which gives an unhampered view of the room as a whole or fixes the gaze on specific points of observation, opening and closing the drapes. Or else simply relaxing, reaffirming the idea of a museum as a heterotopia of contemporary life, where a spatially momentaneous utopia can be enjoyed, removing us from the bustle of the daily life we live.

The new editions of Sofáraokê (Sofaraoke) and Espreguiçadeiras Multi (Multi Beach Chairs) also acquire new layers of meaning when recontextualized in the Eva Klabin House Museum. I often paraphrase Borges, saying that this house-museum is the house of a European in exile. When OPA! bring sunbathing into the house with their Espreguiçadeiras Multi, a work conceived to be experienced at night (Eva Klabin lived a nocturnal existence), they bring the association of a fundamental aspect of life in the city. Meanwhile, Sofáraokê brings back bohemia, just like when Eva Klabin hosted her night-long soirées. It also brings to the fore an important trait of the city, which is the irreverent fun of Carioca humor, something that is sadly on the decline after so many years of maltreatment.

The most emblematic work of the 24th BREATHING is Panis et Circenses. It is the most transgressive expression of the group’s actions and the one that best helps breathe new life into the house-museum and BREATHING. Panis et Circenses is a bubble: a space created by air. It is inflated then, like a lung, it oscillates in the movement of breathing in and out. What is most incredible is its sense of refined irony, because it creates a space where the life that has been removed from the house is musealized. The table in the Dining Room, which no longer hosts the dinners for which it was designed (so as to preserve the collection, preventing the entry of foodstuffs into the protected area of the museum) will, with the bubble, once again be laid with food and drink for consumption inside the museum. The most primal act of life – feeding – is brought back to the house, revitalizing the museum, but this time in musealized form, making us objects to be appreciated by the collection, which watches us, making us captives in our own trap, as if we had been caught in the image in a mirror. 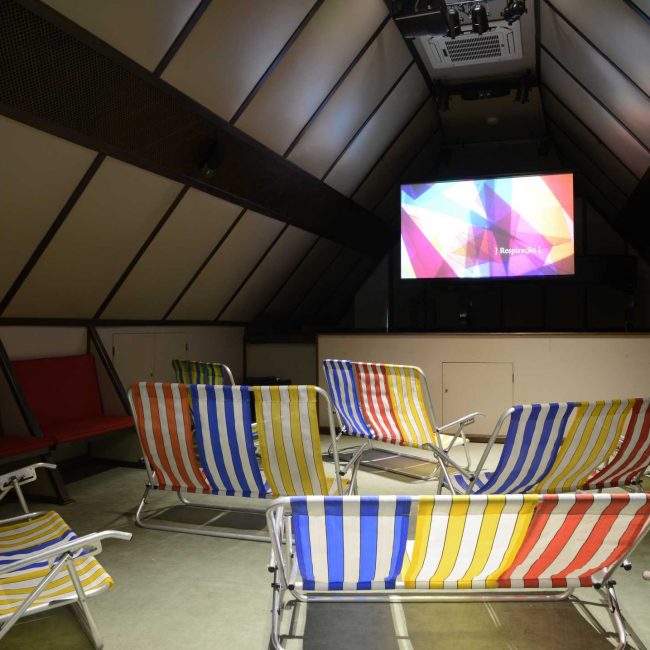 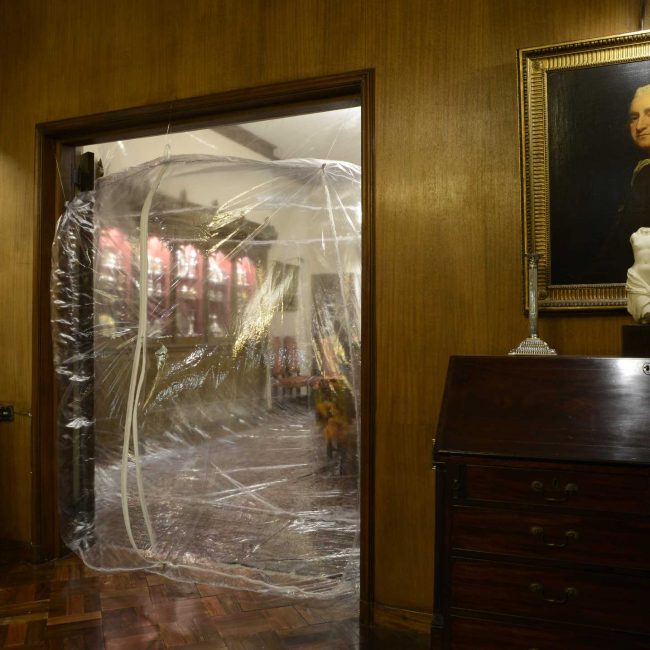 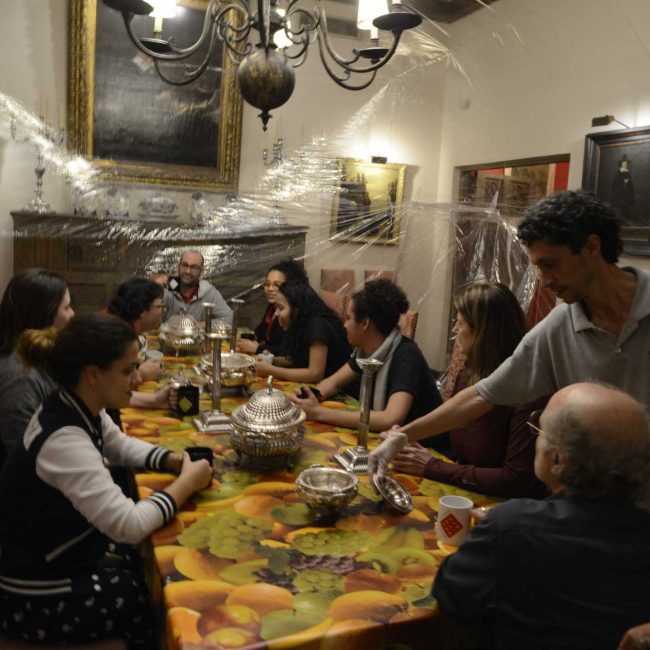 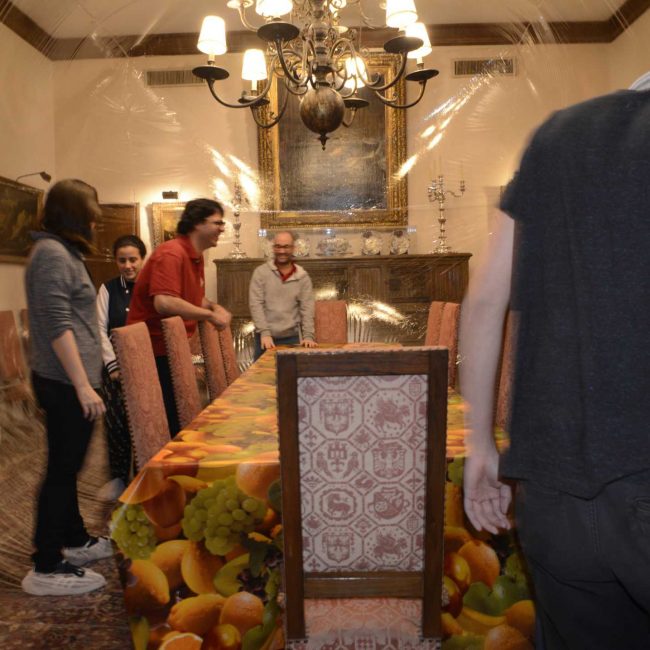 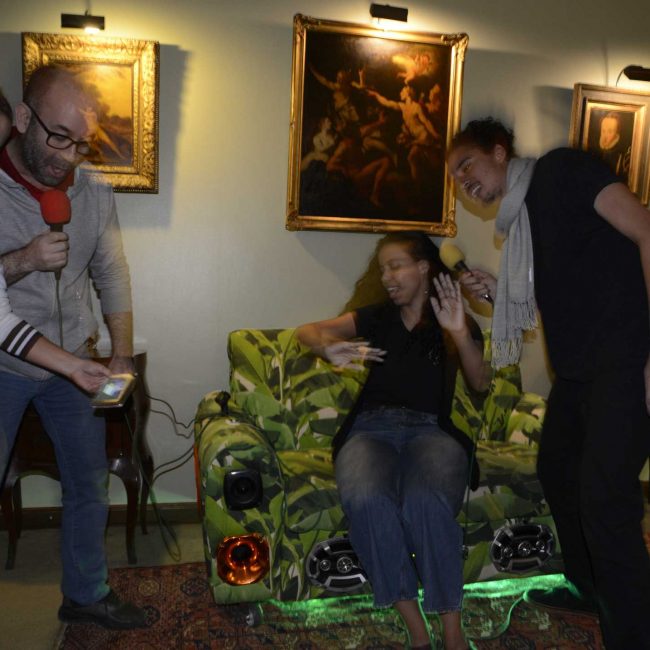 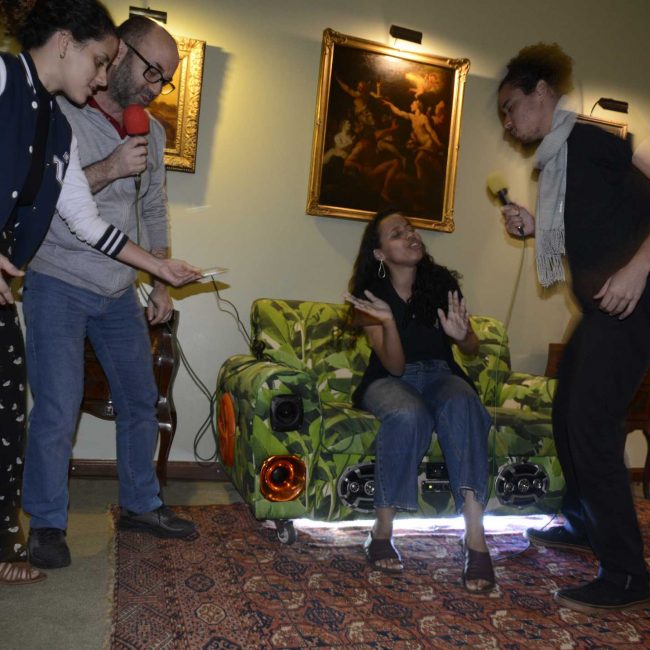 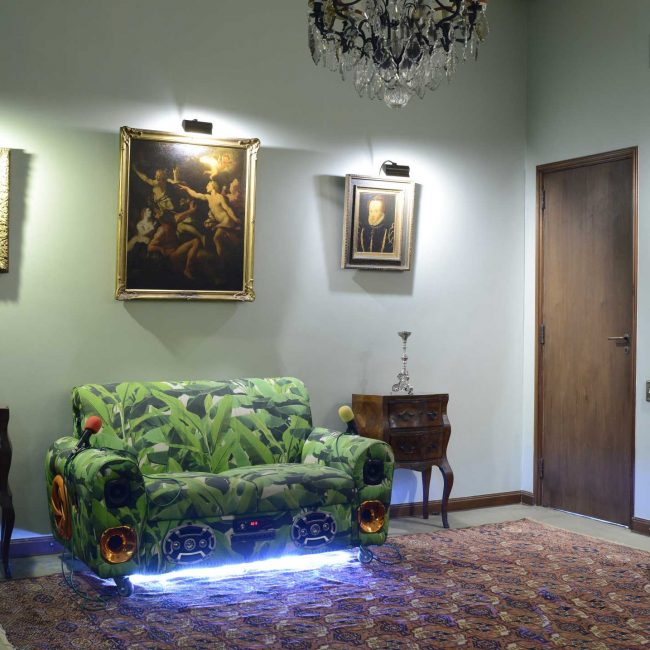 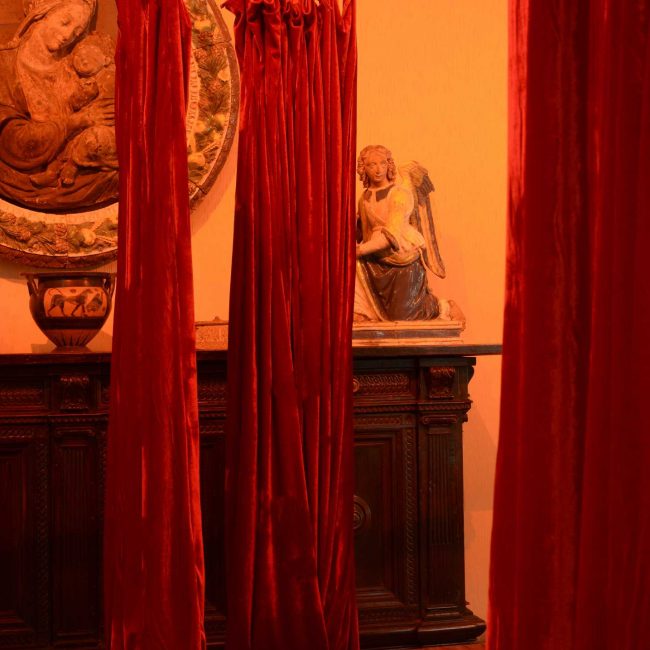 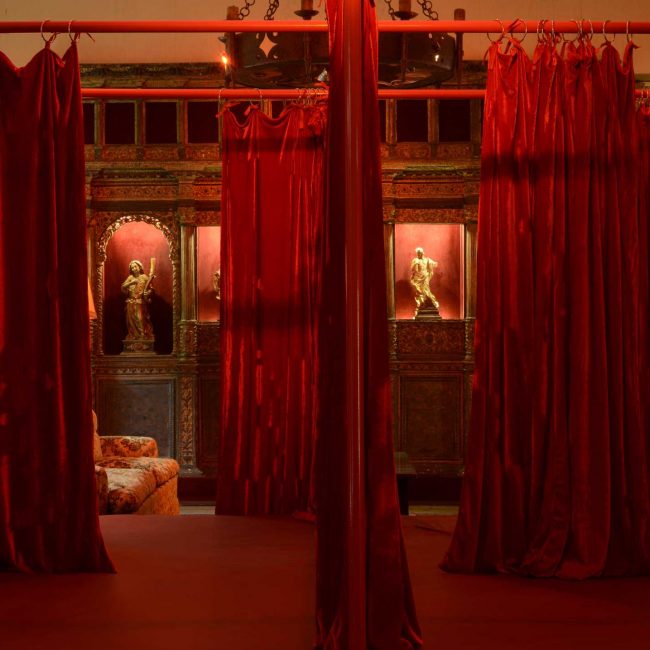 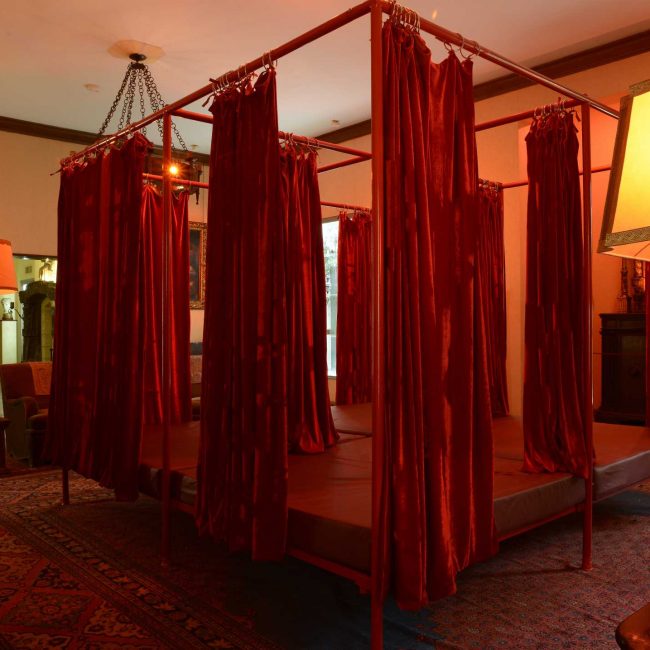 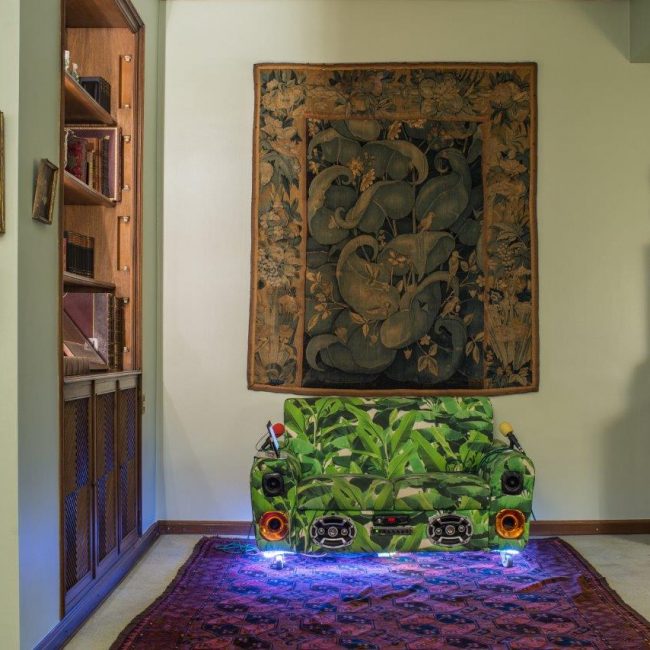 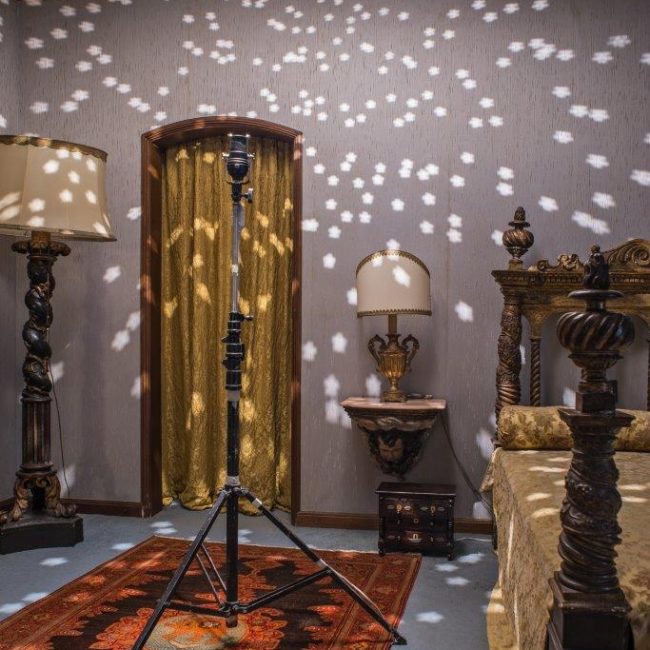 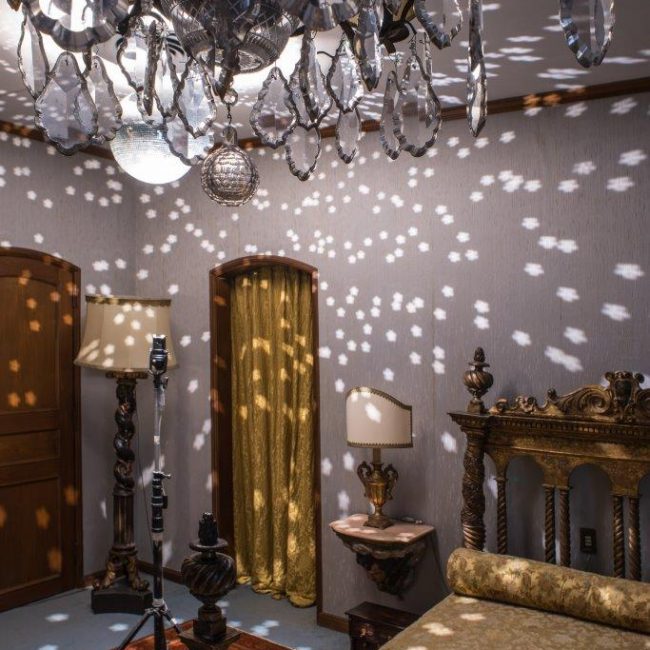 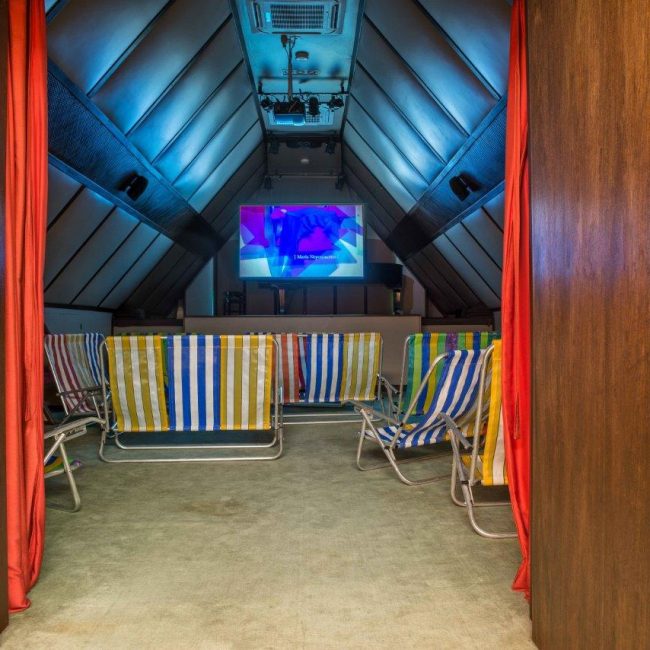 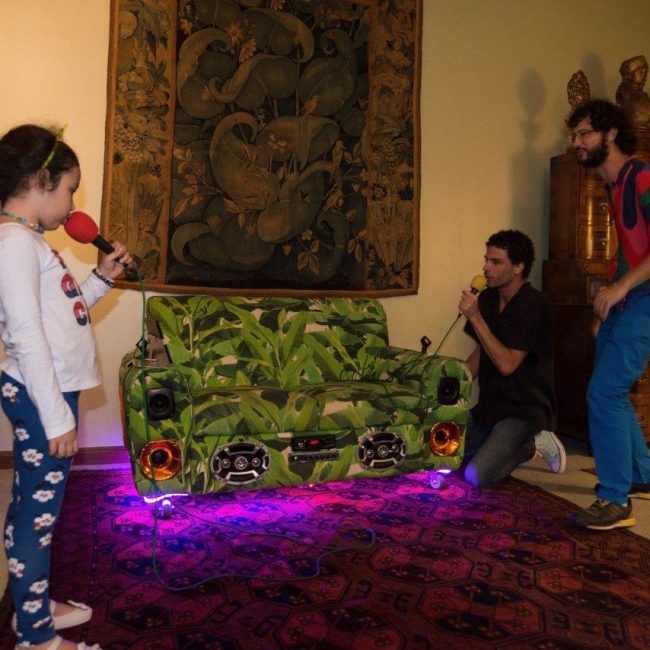 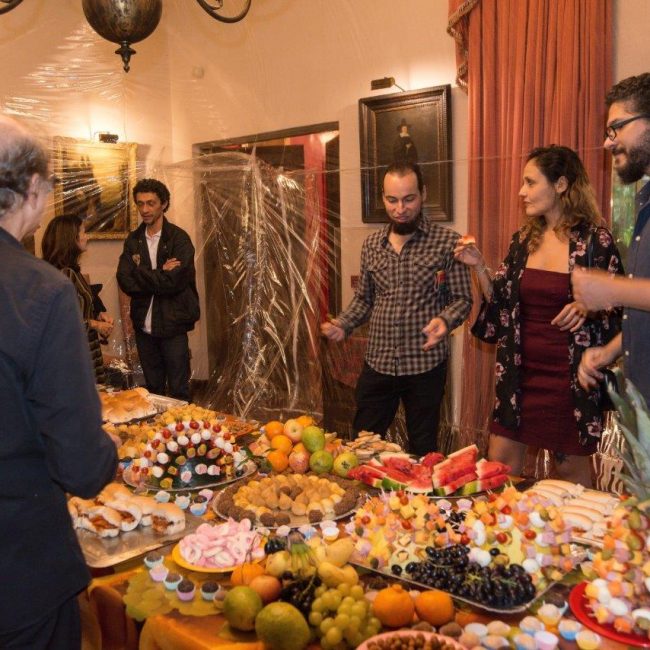 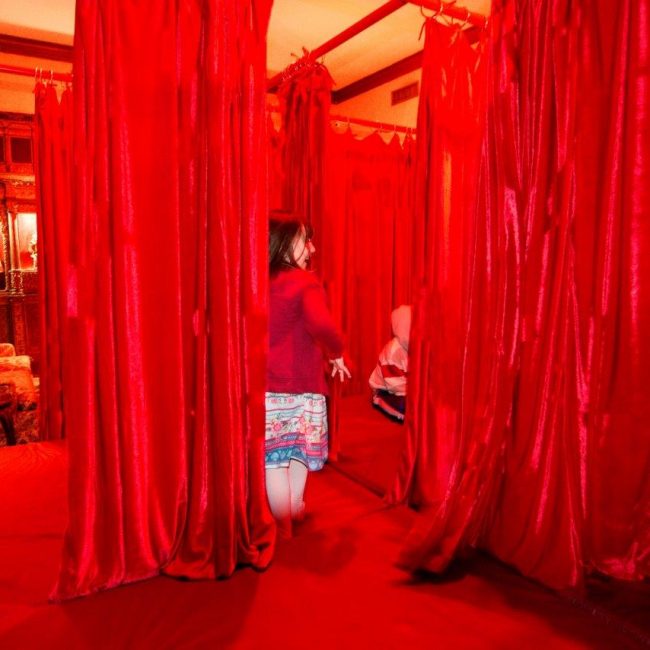 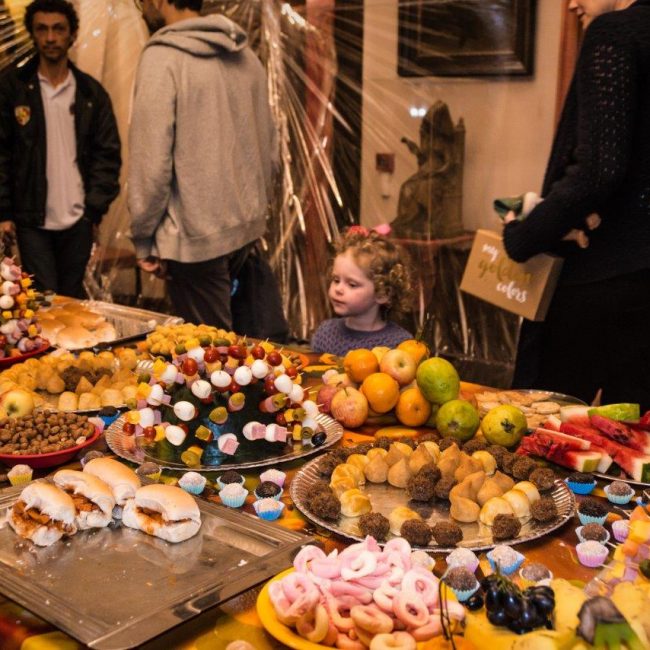 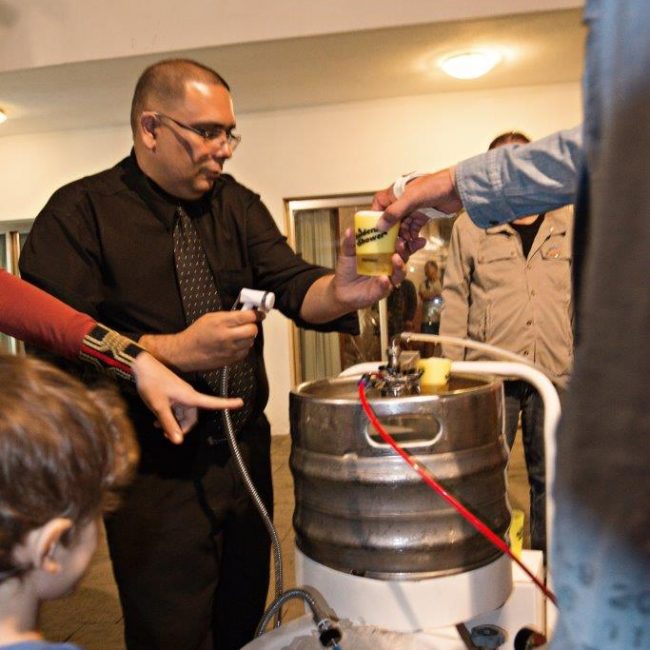 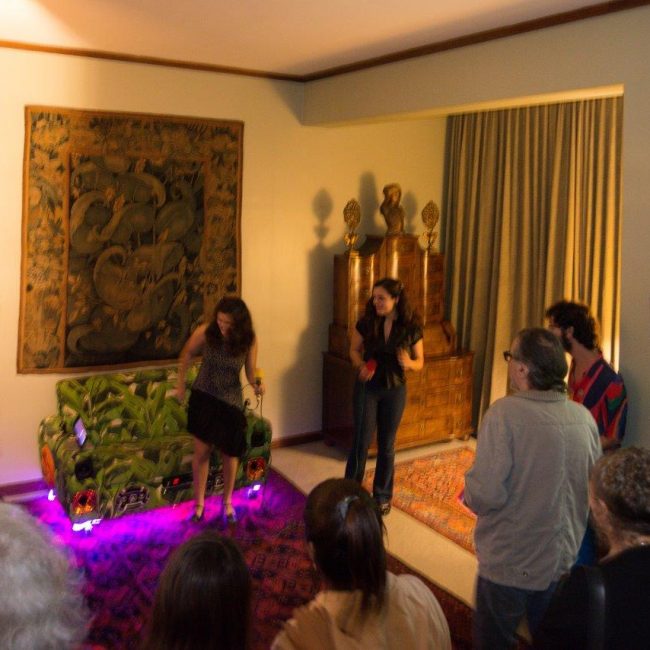 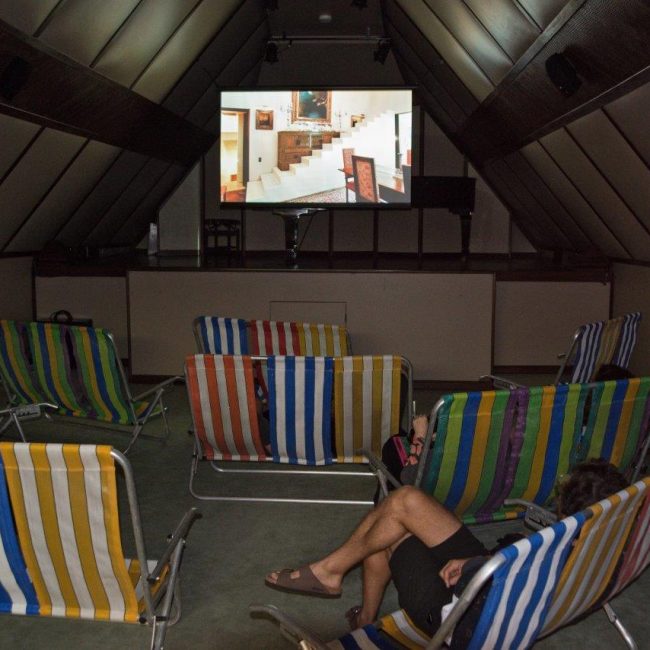 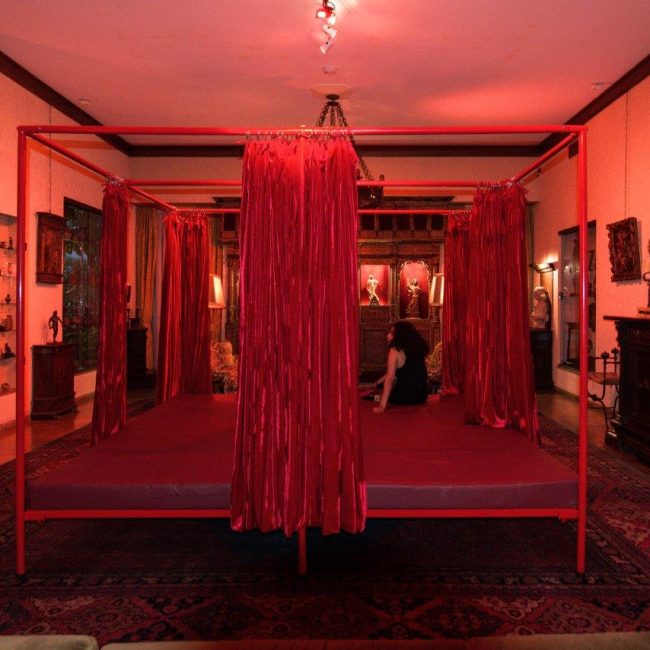 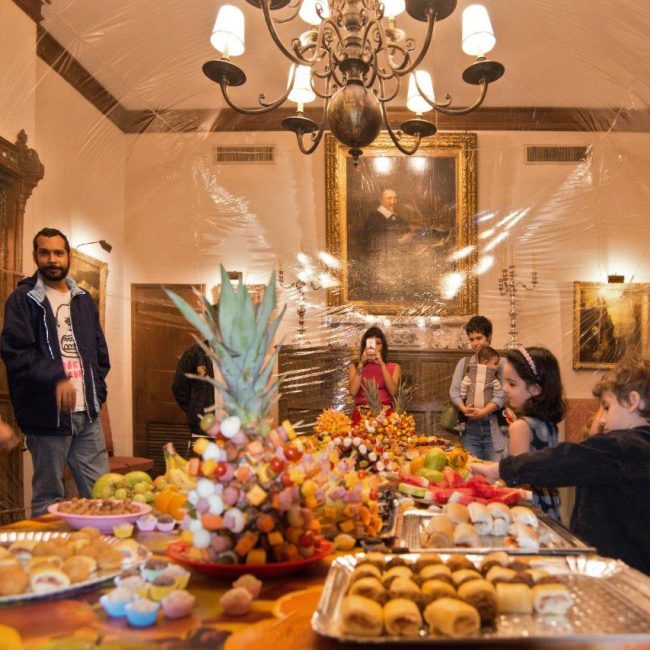 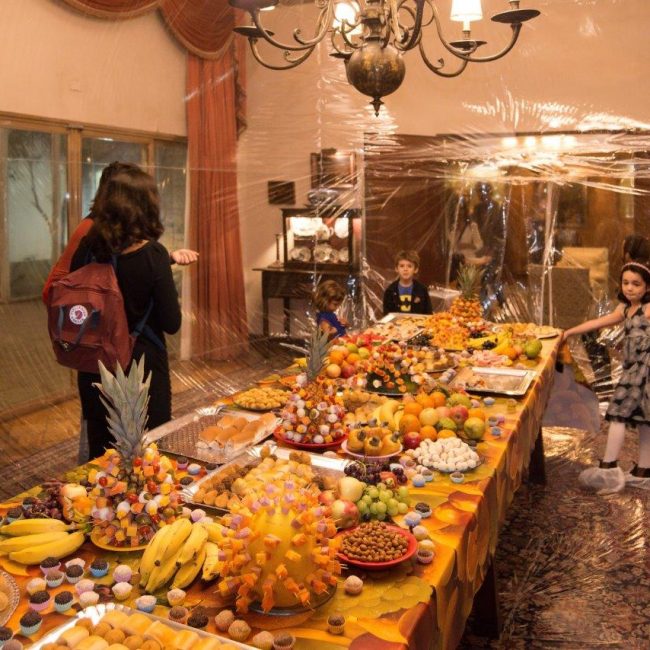 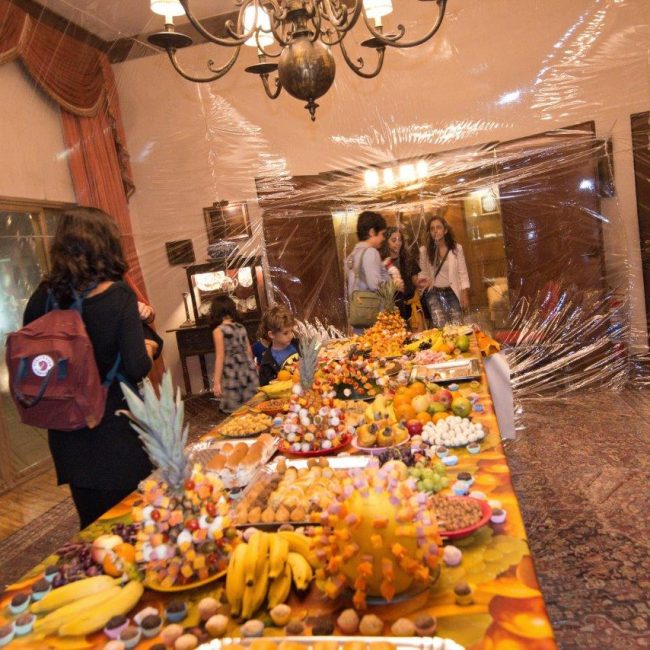 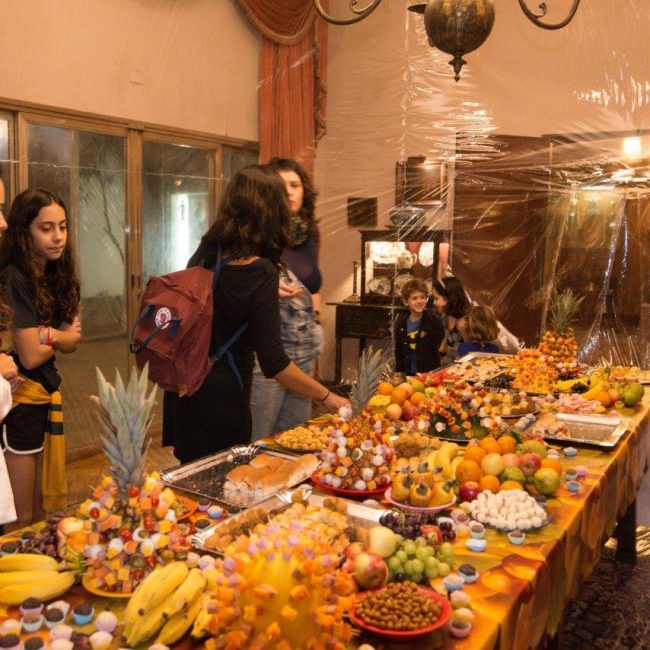 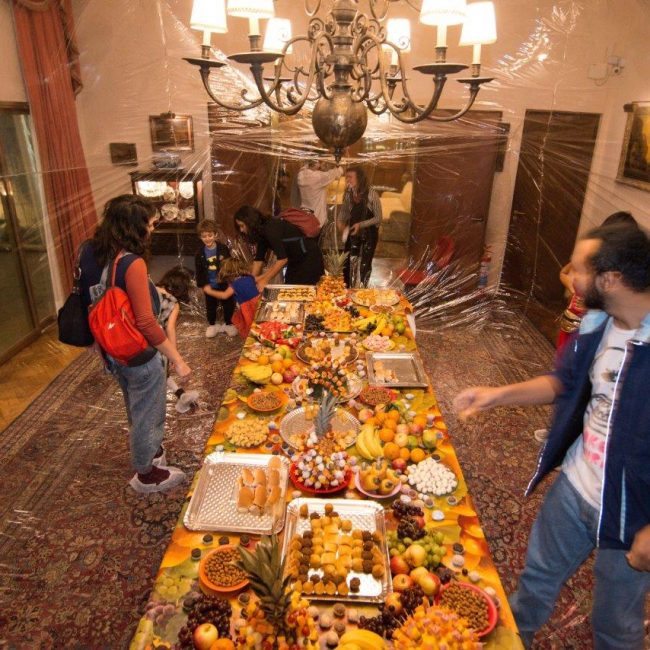 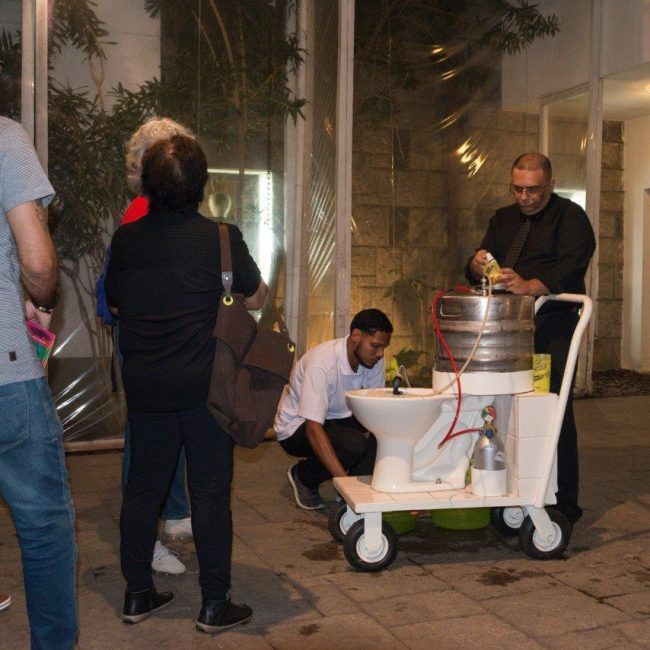 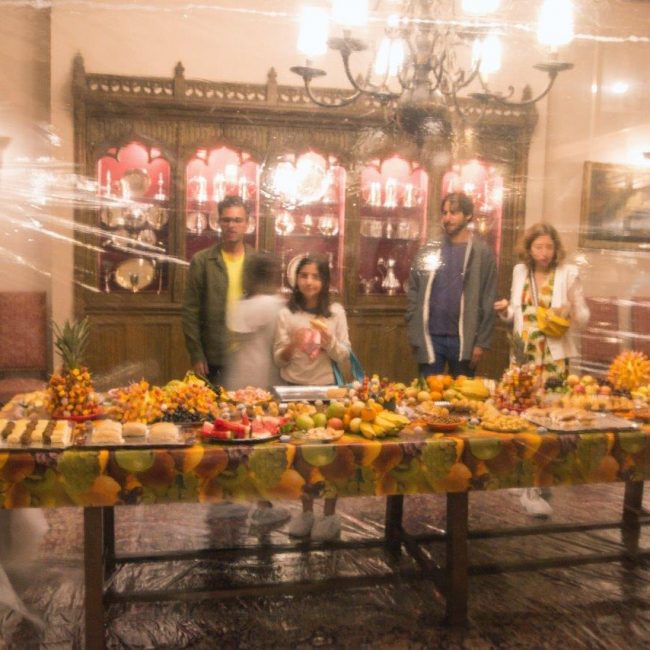 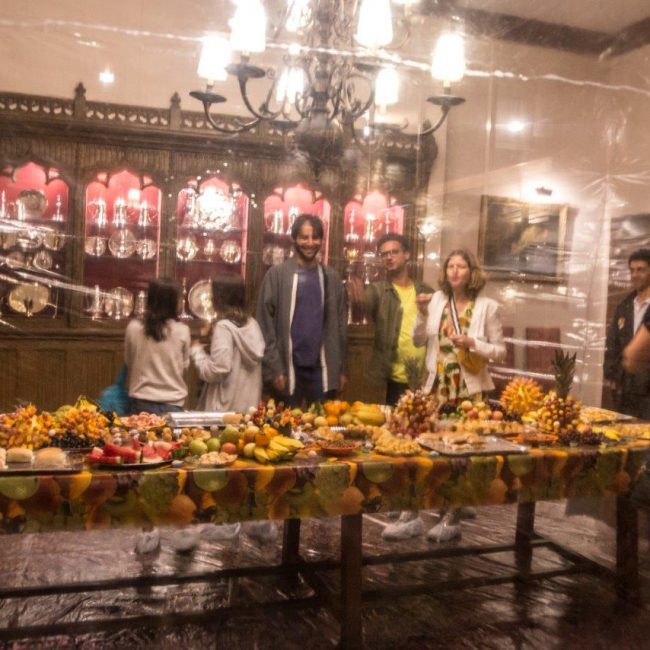