Organic Graffiti or the Collapse of the Plane

In the whirlwind of the 1980s, marked by a growing pace of change unleased by newfound freedom, it was inevitable that a new moment should come that could release the pressure of the cauldron of oppression, which by then had become utterly unbearable. And with the return to democracy came a keen new generation craving to belong to their time. The young artists of this decade produced a cultural uprising that expressed the urges of a bewildered, restless generation who had just realized that political and social freedoms were possible. Democracy was materialized as a real possibility, and with it the desire to expand space and spirit and shape this new time of freedom, making the distant horizon of desire for freedom become a reference against which to express other ways of feeling and perceiving their time.

Under this wave of accelerated expression, when the great political narratives of the twentieth century were being challenged and financial and business capital were calling for a borderless and sometimes timeless world, the visual arts sought out their place, manifesting their expressiveness in a kind of hurricane that swept away the future and replaced it with the immediate and media-oriented forces of the spectacle by discrediting the spirit of modern art and pointing the arrow of time backwards, drawing closer to the baroque, the neoclassical, German expressionism, and American abstract expressionism. The young artists from this time underwent a fascinating period of great productivity under the byword of cultural hybridism. There was something of visual “piracy” in their expressive manifestation as they took possession of different times and created a kind of collage of styles. What for many may have appeared somewhat unstructured was actually the expression of a latent sense of uncertainty, instability, in which an “amorphous” territory experienced during the transition from dictatorship to democracy, between the consolidated time of modern art and a perplexity of becoming, came to challenge the very future of forms as it was impelled toward the past, drawing on a concept that had a strong presence at the time: the discussion around the end of history.

This was the context in which the 1980s artists emerged, which included two branches: Como Vai Você Geração 80? [How Are You, 80s Generation?] and the group  A Moreninha. One appeared wherever the other was absent, they were feminine and plural, but both were driven by an equally pulsating sense of Brazilian culture, eager to cross the lines of force of the visual tradition in Brazil and the western world, but always with diversity and plurality and always embedded in the spirit of Torquato and Gil’s geleia geral, or melting pot, and Chacrinha’s Eu não vim pra explicar / Vim para confundir [I didn’t come to explain / I came to confound]. At the point where these lines of force crossed, between the different times of the idea of modern – from the Renaissance to the present day – and the two times in this moment of history in Brazilian art (Como Vai Você Geração 80? and A Moreninha), came Hilton Berredo, who successfully managed to associate 1980s painting with the intuitive logic of post-Neoconcrete construction.

What makes Berredo’s work so special? I would say it is the collapse of the plane. And what do I mean by that? Perhaps it is worth reproducing here a conversation we had in 1987 (if I am not mistaken) on the occasion of his exhibitions at the Thomas Cohn (Rio de Janeiro), Luisa Strina (São Paulo), and Usina (Vitória) galleries.

HB: If you work with art these days in Brazil, you have to address the Neoconcrete legacy. Perhaps here we shouldn’t talk in terms of modernism or postmodernism, but in terms of Neoconcrete. One side is about the Bólides and the Parangolés. The other is about the visuality of geometry.

MD: One of the differences is whether or not you’re interested in the space of the canvas. When Hélio Oiticica seeks out a favela aesthetic, he’s totally immersed in that space and wants to extract a visual experience from that materiality. The Hélio of the Parangolés isn’t Neoconcrete any more. Neoconcrete came before. This is something else that came later and isn’t catalogued yet. It isn’t theoretically arranged in the history of Brazilian art.

HB: The Parangolés weren’t absorbed by Brazilian art yet. They’re so complex, they escape every which way: in the relationship with the body, in the construction of the work, in the artisanal nature, the geometry, the rational understanding of the work process as an opening to intuition, which is what fascinates me most. Given that we’re doing art after them, it becomes a question of choosing references: either you turn back to painting or you set off in the directions pointed out by the post-Neoconcrete rupture.

MD: That’s why I referred to the dilemma of painting-yes, painting-no, but as a paradigm of another way of mapping art.

Why have I reproduced this part of my conversation with Berredo? Because it is representative of the topic of our conversations and interests, so present at that time, which was to understand the implications of being limited to a discussion between modernism and postmodernism and the return to painting, as advocated by the exhibition Como vai você geração 80?, when developments within Brazilian art were probing other questions and potentialities that were just as important, like the contribution of the artists from the post-Neoconcrete rupture (the Lygias, Clark and Pape, and Hélio Oiticica). These reflections about a possible change of direction, which our discussion revealed, was what gave rise, together with other artists, to A Moreninha, which developed alongside the space created by the more media-oriented branch of our generation, bringing to the cultural debate the dilemma of painting-yes, painting-no, which ended up having a strong influence on the generation of artists who came of age in the 1990s, who kept clear of the controversy about painting and the canvas because it had already been addressed by our generation, especially with A Moreninha.

Years later, in 2021, we are being given the chance to work together again in a new project: Breathing Façade. It occurred to me to invite him to take part because of the potency and importance of his work and because I would be able to offer him a façade to occupy; a place where painting reinvented itself in urban spaces with graffiti, which makes blank canvases of the great planes available in cities, like walls, sides of buildings, and façades. What Berredo is proposing is Organic Graffiti, three-dimensional forms that set about challenging the plane. That is why I made reference to his artistic work as collapsing the plane – a point I would like to elucidate by explicating the internal creative logic of these works that constitute this occupation.

If we bear in mind the way Berredo described Hélio Oiticica’s creative process, we can understand his own process better: “the rational understanding of the work process as an opening to intuition.”

The matrix for all these works is the same: they start out from a flat piece of black rubber which is then cut in the same way. So what differentiates them? The gesture and action of making multiple combinations of this equally-cut plane, whose incision enables it to be bent, producing a multiplicity of three-dimensional forms. It has the same logic of the cut and the fold as in Amílcar de Castro’s work, but none of the geometric commitment or setting on a final form. Rather, Berredo wants to collapse the plane, as Lygia Clark did, and make the sculpture a continuum of topological and organic characteristics that can be altered in the moment of the action, the gesture, the forces of nature that may act on it (in Berredo’s case), like the wind. The cut and the matrix are repeated, but they are combined multifariously so as to change the morphology of each one, eliciting difference. This relationship between the rational and the intuitive, the one and the multiple, has the same dynamic as organic forms of nature, which, upon multiplying, conserve a shared origin while at the same time transforming. His expressive language seeks out the place of non-representation, pursuing form, not  mold. By avoiding repetition, it empties out the meaning of the mold by appropriating it as a pretext and a rational, logical vehicle to liberate intuition and achieve the plasticity of the form, which then becomes an agent for the production of difference.

Hilton Berredo’s work, or his folds, are a reinvention based on the post-Neoconcrete rupture. To return to his own words, it is not a matter of “talk[ing] in terms of modernism or postmodernism, but in terms of Neoconcrete. One side is about the Bólides and the Parangolés. The other is about the visuality of geometry.” Berredo clearly discerns the difference between a sensitive and elegant geometry that takes place on the plane and reproduces a familiar, established visual syntax, and an organic geometry that envisages depths beyond the plane, beyond representation. And yet his works made of rubber are more than this; there are other lines of force acting on them that make explicit their multiple sources of origin.

Not only is Berredo’s work in rubber heir to the constructivist and intuitive rationale of the post-Neoconcrete rupture, but it brings to the fore the lines of force of surrealism and the baroque. His imagination is surrealist, his procedure is Dadaist, and his intensity is baroque. His forms seem to spring from the unconscious. It is good to remember that if there is something rigorous and systematic in the incisions he makes in his work, their purpose is passing, enabling surrender to the serendipity of gesture (as in Lygia Clark’s Bichos) or the action of time (the wind that will make changes to the forms as they occupy the façade of the Eva Klabin House Museum). His work also has a baroque urge; its intense, dramatic, sensual composition strives for meaning and totality. Indeed, the collapse of the plane here has something in common with the sense of superimposition and expansion of space in the baroque, which, in the midst of the exuberance of forms, seeks a way out toward the light, which opens up to the profundity of space, as seen in some baroque cathedrals, where the roof over the altar has an opening to enable communion with the heavens.

The importance and singularity of Berredo’s work lies in the folds he makes among the many potencies of art history. Starting with an early experience in the 1980s, giving expression to the fragmentation and diversity that became evident in the very structure of capitalism and information technology, causing an amalgamation of multiple times and spaces , Berredo’s work absorbs this dynamic of cultural hybridism or visual piracy, as I call it, but avoids any reduction of the discussion between modernism and postmodernism, instead indicating a way out through the post-Neoconcrete rupture. This wealth of perception is what inspires him to create these exuberant forms, which eschew a directly reactive and nihilistic impulse toward the forces of culture, as proposed by the modern vs. postmodern clash. His way out is to collapse the plane, allowing him to deal with space as a combination of the intuitive rationale seen in Lygia Clark’s Trepantes and the intensity of the baroque and surrealist imagination.

I would like to end by citing part of an exchange of WhatsApp messages I maintained with Hilton Berredo while the exhibition Breathing Façade / Organic Graffiti was being prepared. In it, he reveals a clarity and consciousness of the question of space in his work: “Paul Klee […] said that the artist’s problem is augmenting given space. His strategy was to superimpose transparent figures, making more objects fit into a given support than the logic of real space would allow.” Berredo makes the plane collapse in order to expand space, giving formal continuity to the post-Neoconcrete rupture. 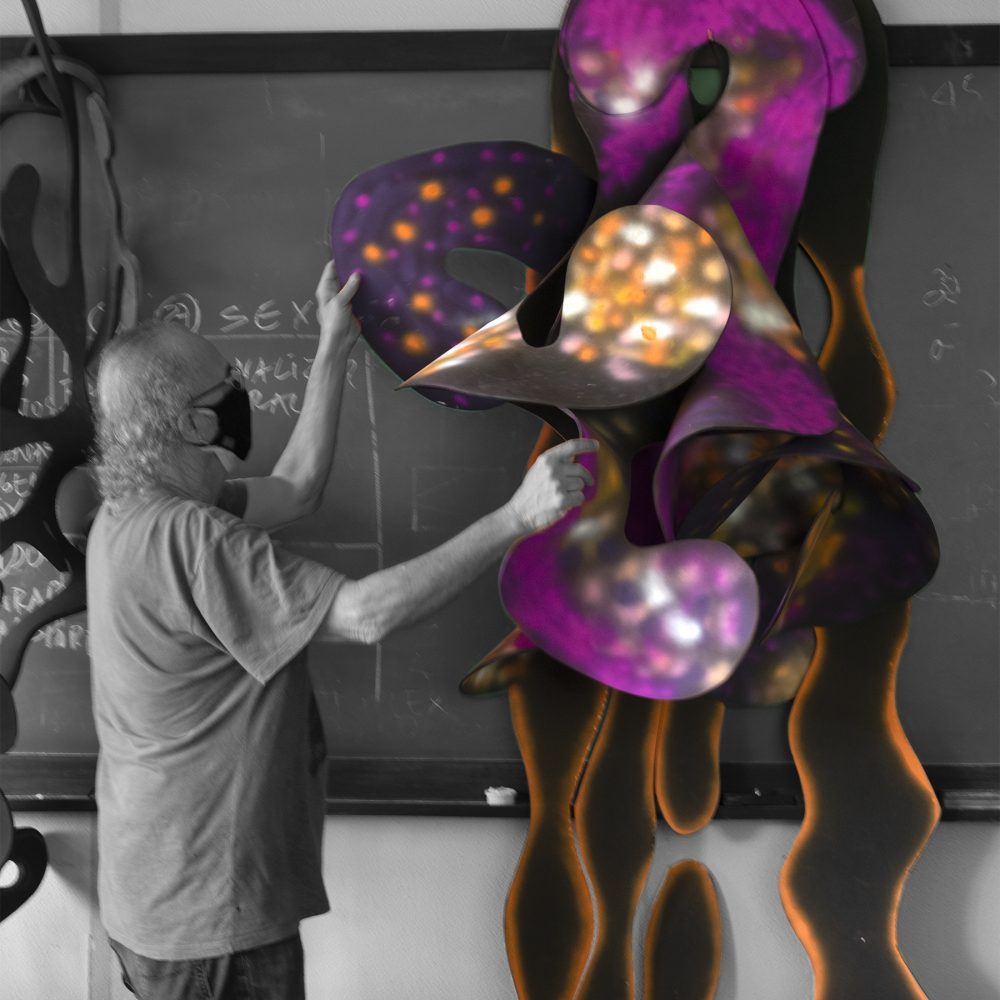 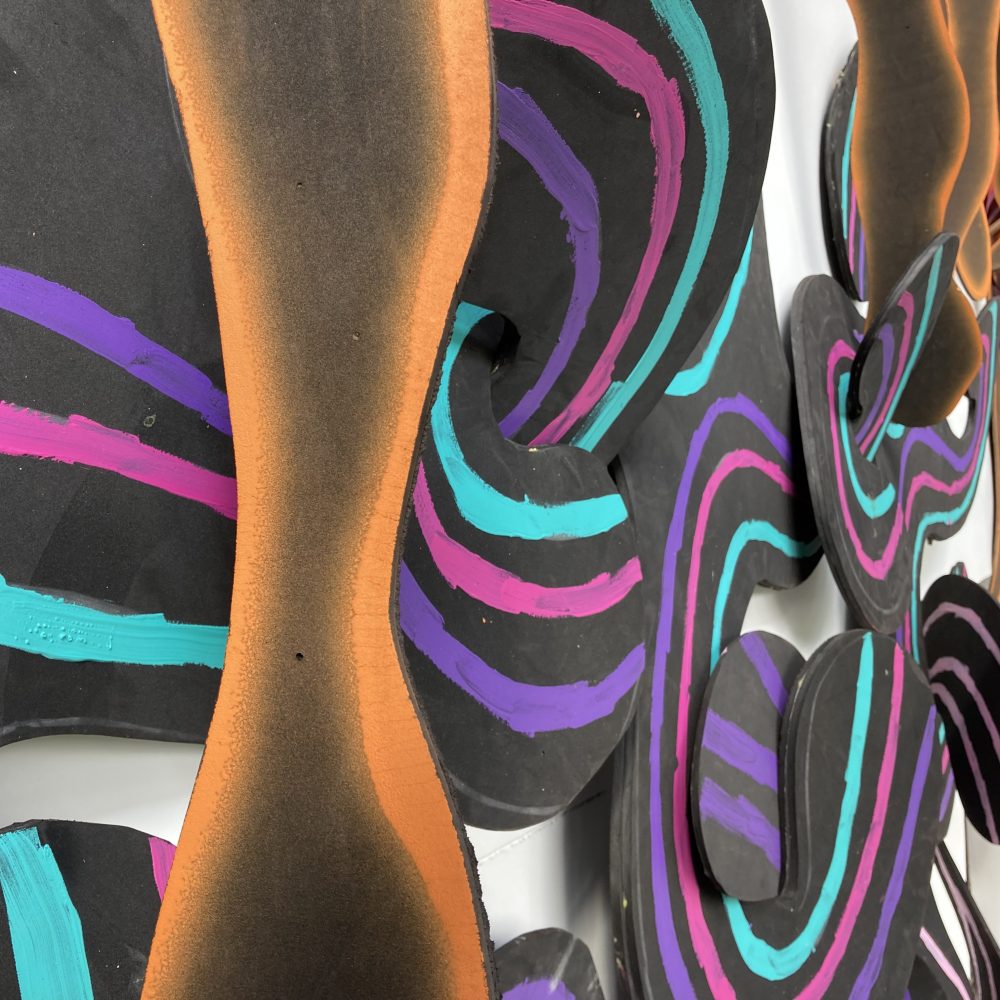 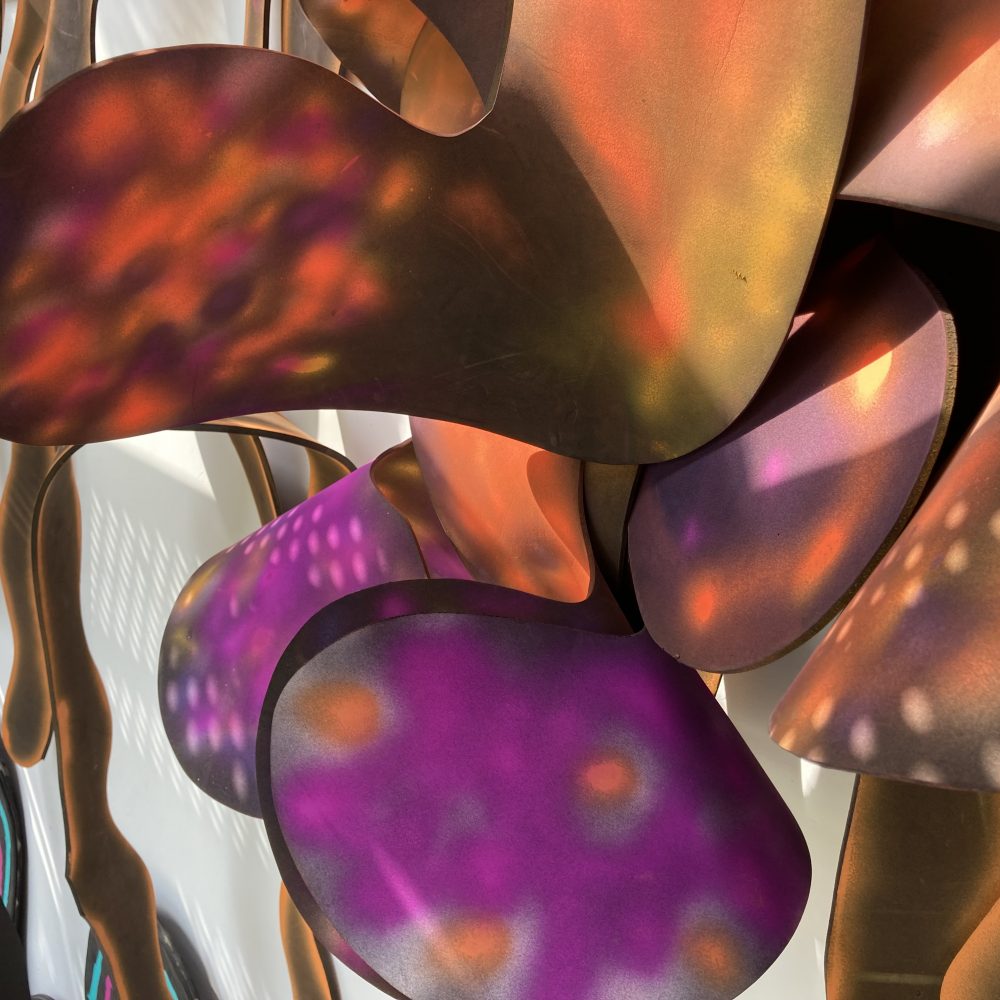 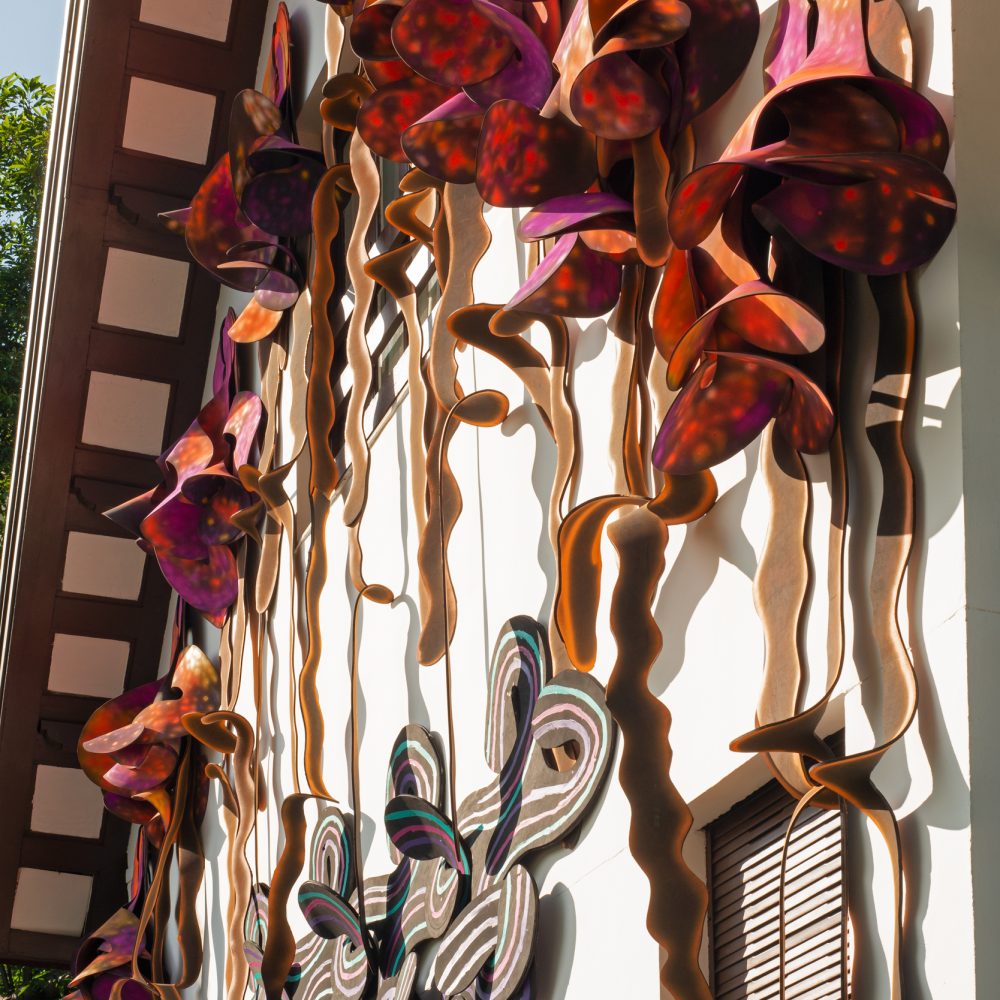 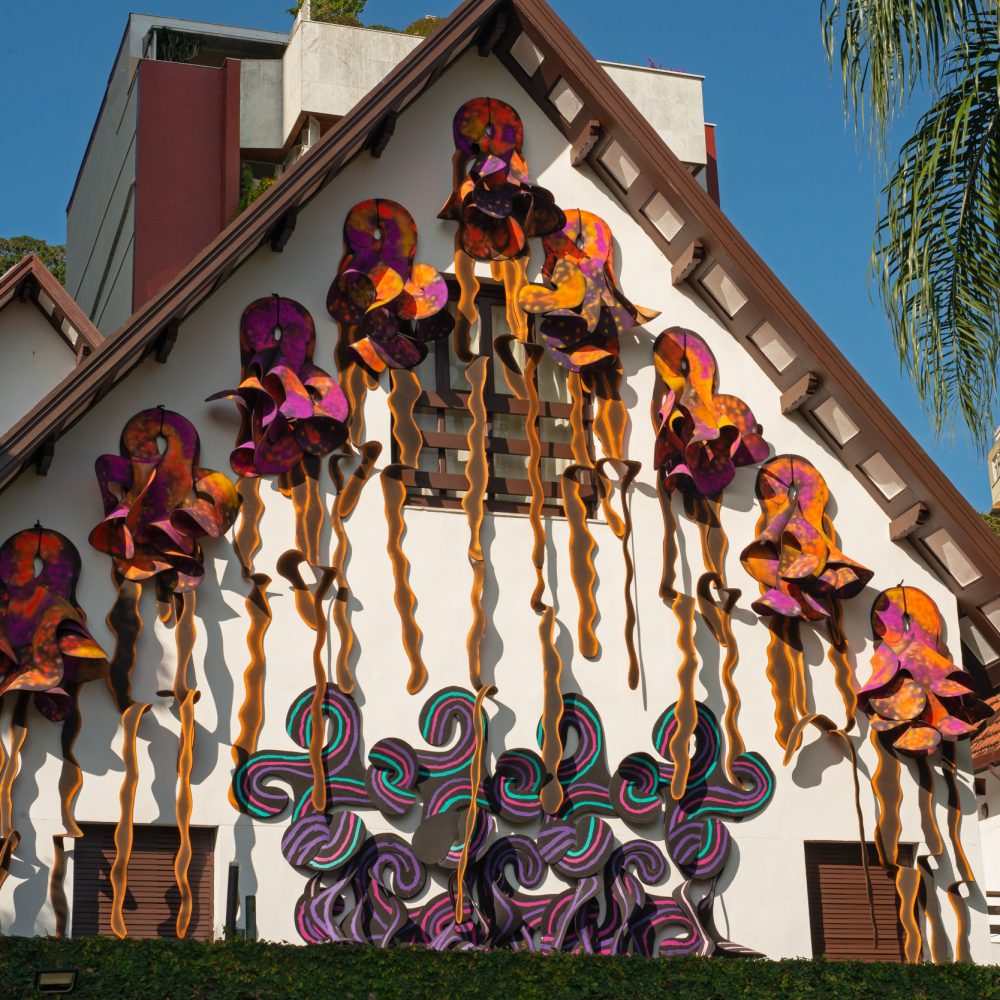 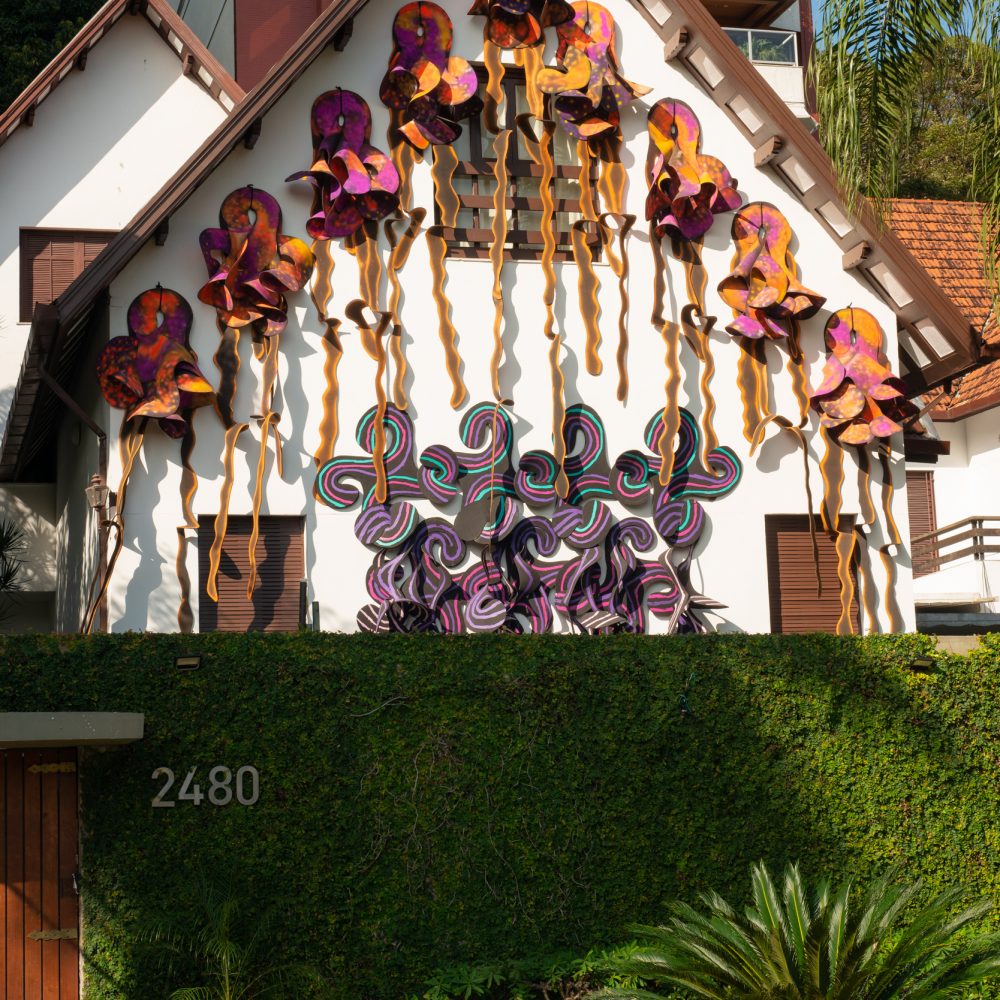 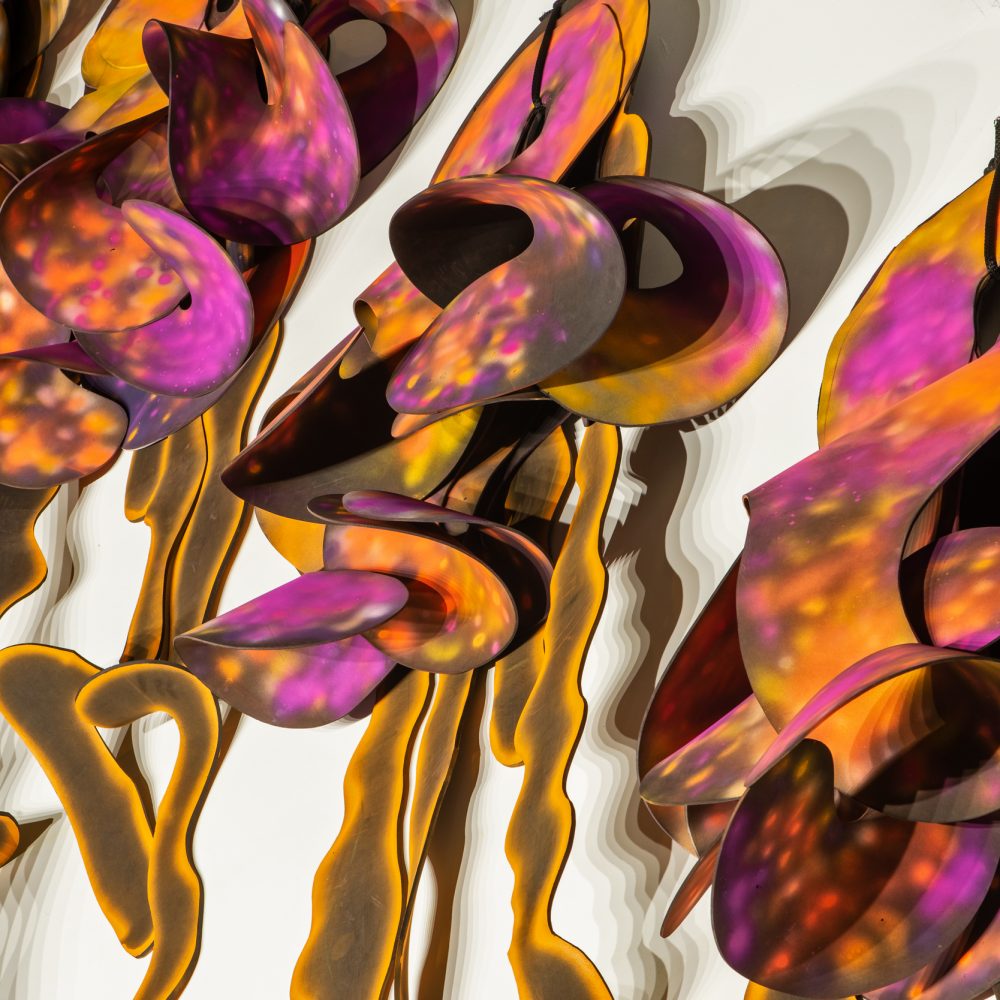